A Day in the Life of … Squash Player Cindy Cao ’23

A student-athlete double-majoring in cellular and molecular biology and English shares how she balances training, competition, and courses at Barnard.

Three years of college life as a student-athlete has made Cindy Cao ’23 a master of time management — otherwise, how else would she get it all done as a squash player and a double major in cellular and molecular biology and English? The curious (and busy!) junior admits, “I’ve learned that I can’t join every club or take every class I’m interested in during my four years here,” adding that “a valuable skill I’ve gained is how to prioritize what matters to me at the moment.”

A nearly lifelong priority — and a major reason why her schedule is so strenuous — is squash. Born in Los Angeles, but raised in Vancouver, Canada, Cao spent an energetic childhood immersed in various sports but soon learned there was nothing like the experience squash brought her. “Until I played squash, I didn’t know what a passion should feel like,” Cao says.

When she got to Barnard, Cao soon discovered there was more than top athleticism happening on the squash team; there was also true camaraderie. She credits her teammates with helping her to persevere, as they support each other through thick and thin. “They’ve been a source of comfort and guidance since I set foot on campus,” says Cao.

Cao plays through the Columbia-Barnard Athletic Consortium, a unique collaboration that supports Barnard athletes competing with Columbia undergrads in the Ivy League Athletic Conference and NCAA Division 1 Athletics, making Barnard the only women’s college to hold this unique space. Earlier in April, Cao was one of four women to receive a CSA [College Squash Association] Scholar-Athlete Award. According to Columbia’s April 2022 squash newsletter, the award was granted to “juniors or seniors who have played on the team throughout their college career, earned at least two varsity letters, participated in the majority of the team’s matches in the top 10 of the lineup during the season, and achieved a high academic standing at their institution.”

Check out a competition day for her, one in which she went to the nationals at Harvard University’s Murr Center in Cambridge, Massachusetts, with her teammates, from her “Day in the Life” log and TikTok video (music editing by Deena Corkindale ’23, @deenastunes), below: 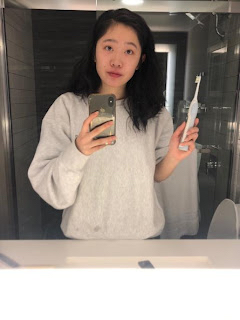 7:30 a.m.: Rise and shine! Nothing like a good wash and brush. I like starting the day by getting lots of natural light to wake up both my body and brain. After a quick journal reflection, I’m ready to go. 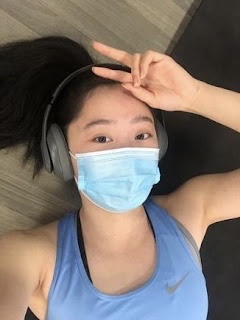 8 a.m.: Quick mobility. Because we have a match later in the day, I like to loosen up my limbs first thing [in the morning], just to get the mental and physical processes started. I hit the hotel gym and did some mobility, core, and easy stretches. It’s a good way for me to take some time by myself with music. Here, I’m listening to my warmup/hype song, “Si Veo a Tu Mamá” by Bad Bunny. 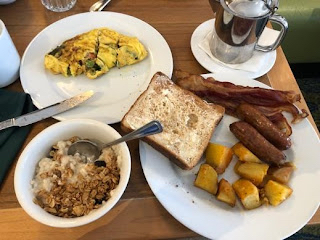 9 a.m.: Team breakfast! Favorite meal + favorite people = great start to the day. As an early bird, I have the liberty of watching my teammates trickle in for breakfast. I took advantage of the hotel breakfast — omelet bar and all (Ferris who?). Since we’re playing later in the evening [at the Murr Center], a larger meal filled with complex carbohydrates should sustain me for the next few hours. 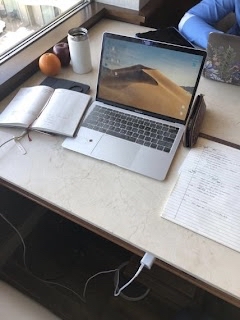 10 a.m.: Homework. The grind never stops. I did some reading and also finished up an analysis for lab work. Fruits were nearby to snack on! 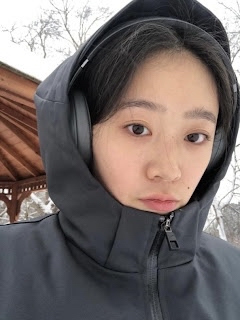 11 a.m.: A walk in the park. What’s better than a snowy walk to clear the brain? I made sure to layer up in the snow.

1:30 p.m.: Lunchtime. The team headed to Harvard Square to grab lunch. Got a warming dish of shakshuka with a side of bread. Final chance to fuel pre-match.

2:30 p.m.: After arriving at the courts, we had a team meeting to get our mental states prepped for the match. Because of COVID-19, a few aspects of competition have changed. Athletes have to get tested before being cleared to travel. And spectators are limited and required to wear masks. But the excitement of competing has not worn off! 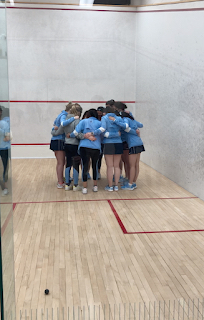 3 p.m.: Match time! The coach and team captain introduce the top nine players. We have our team huddle before the first matches begin. I played second and had a close 3-1 loss. In order for a team to win a match, five out of the nine players have to win their matches. 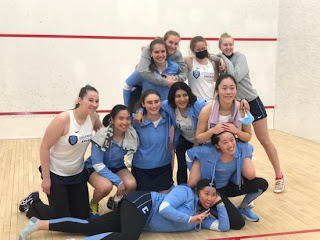 5 p.m.: Matches concluded. We had a great run this nationals, coming in 8th in the nation.