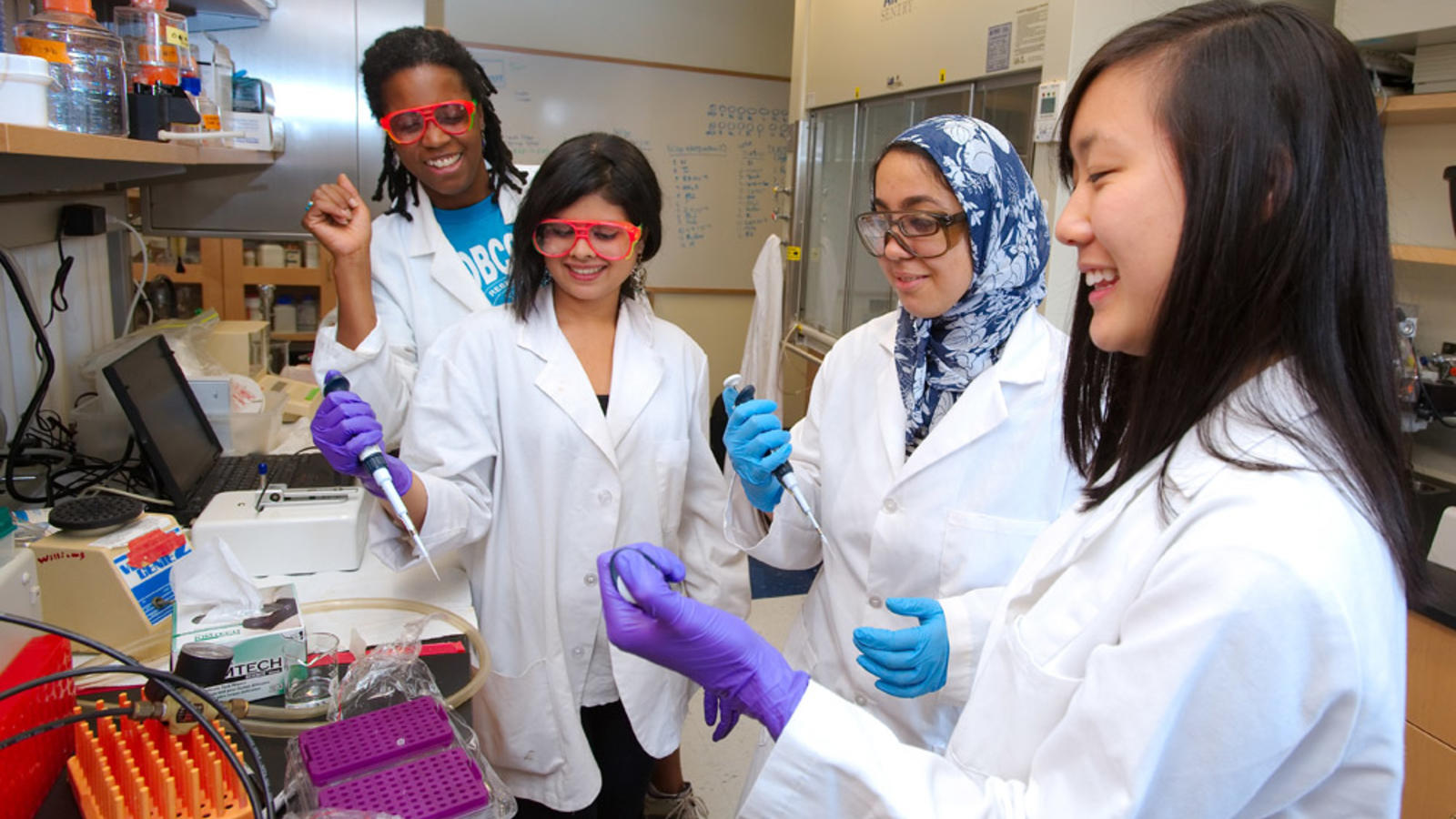 From September 2021 to June 2022, Barnard celebrated all things related to science, technology, engineering, and math (STEM). The College launched the Barnard Year of Science (BYOS) with the 2021 Convocation ceremony on September 14, the traditional start of the academic year.

Barnard’s expert faculty, its symbiotic relationship with Columbia University, and its location in New York City makes it singularly positioned to offer unparalleled opportunities to women who will become tomorrow’s STEM leaders. The College has also increasingly incorporated STEM curricula and programming into its liberal arts education, providing students with interdisciplinary knowledge and skill sets that they can carry beyond Barnard.

Barnard Year of Science also exemplified the College’s commitment to establishing itself as a leading educational institution in STEM and the arts. The mission continues to be to help students develop the intellectual drive required to excel, with an eye toward the emergence of new fields, new ideas, and new technologies.

Young women interested in the sciences are choosing Barnard more than ever before in the College’s 132-year history: 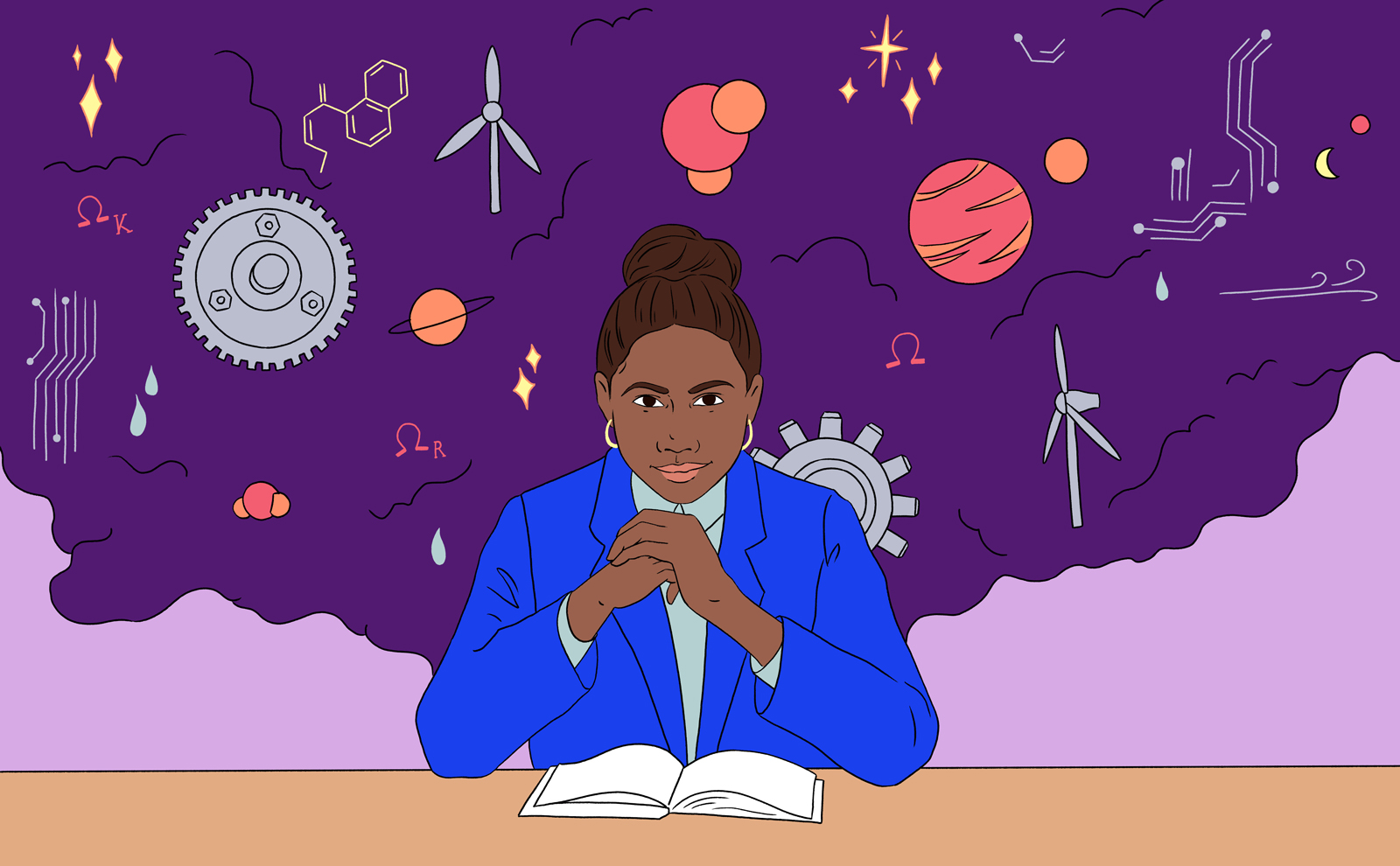 Connecting to the Cosmos: What Is Our Planet’s Destiny? 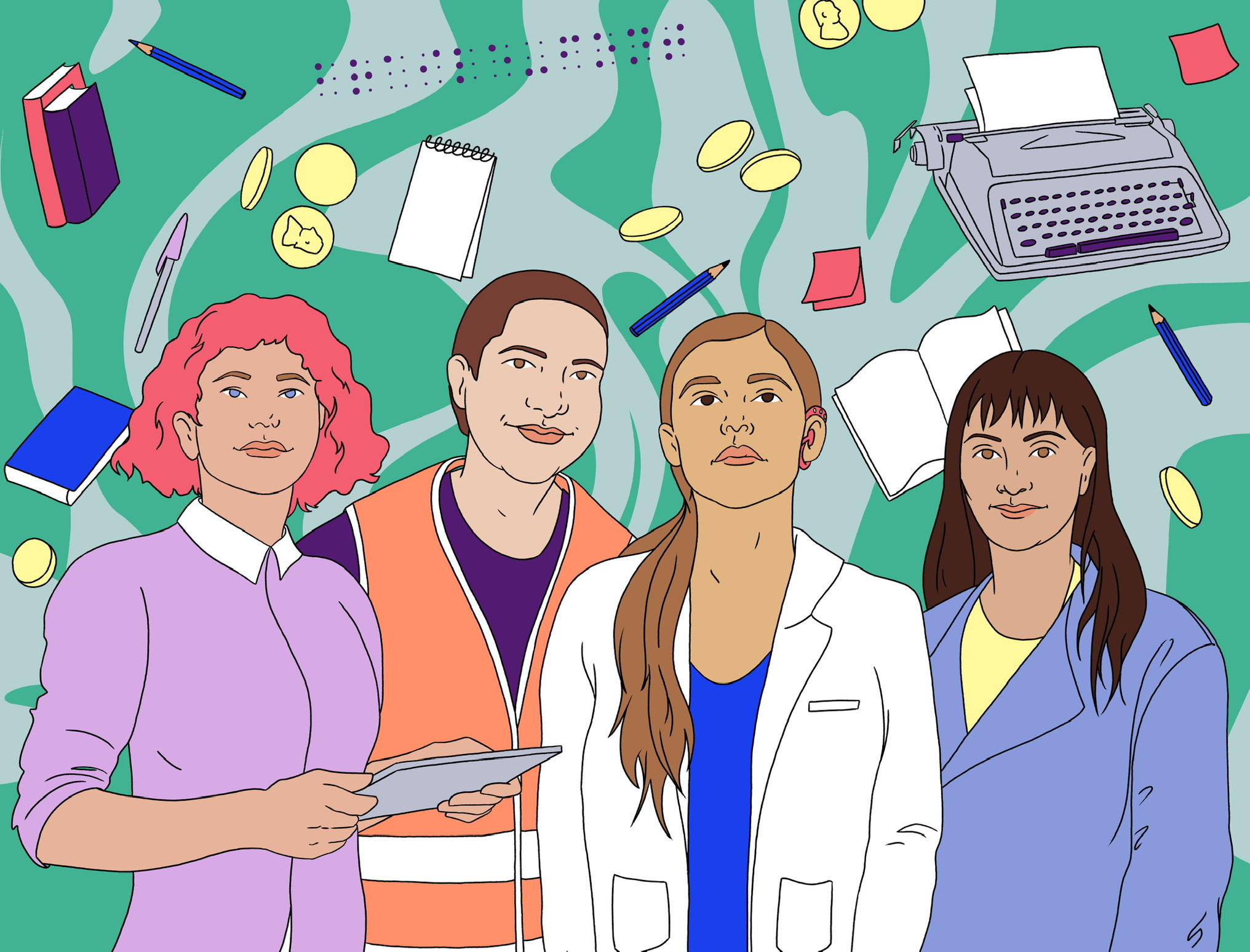 The Reach of Scientific Principle: How Do We Communicate Science?

Exploring: the Politics of Environmental Decision-Making, Outsourcing Pollution, the Impact of Science on the Arts, Science Writing Fellows 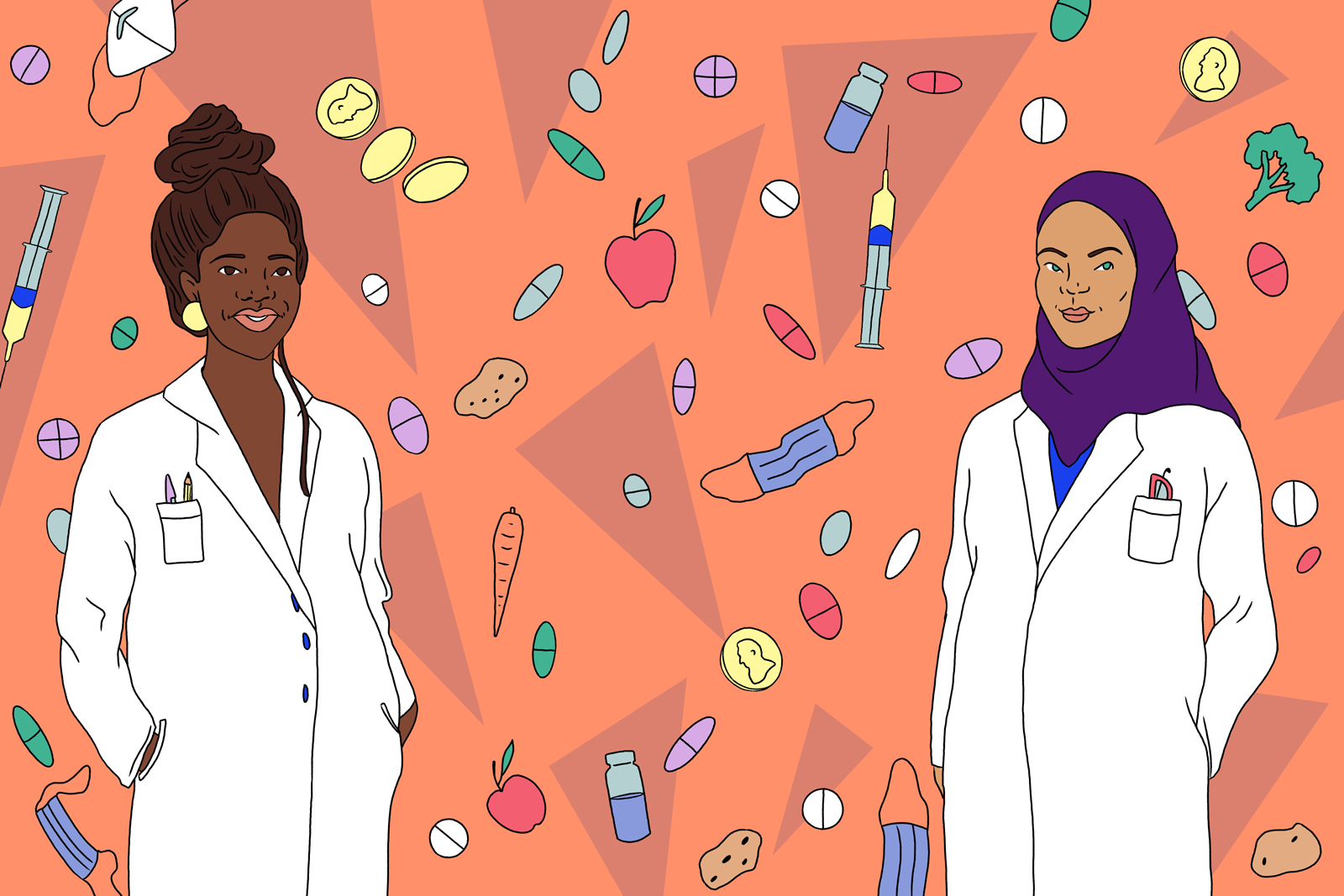 Longevity and Scientific Knowledge: How Can Human Beings Thrive? 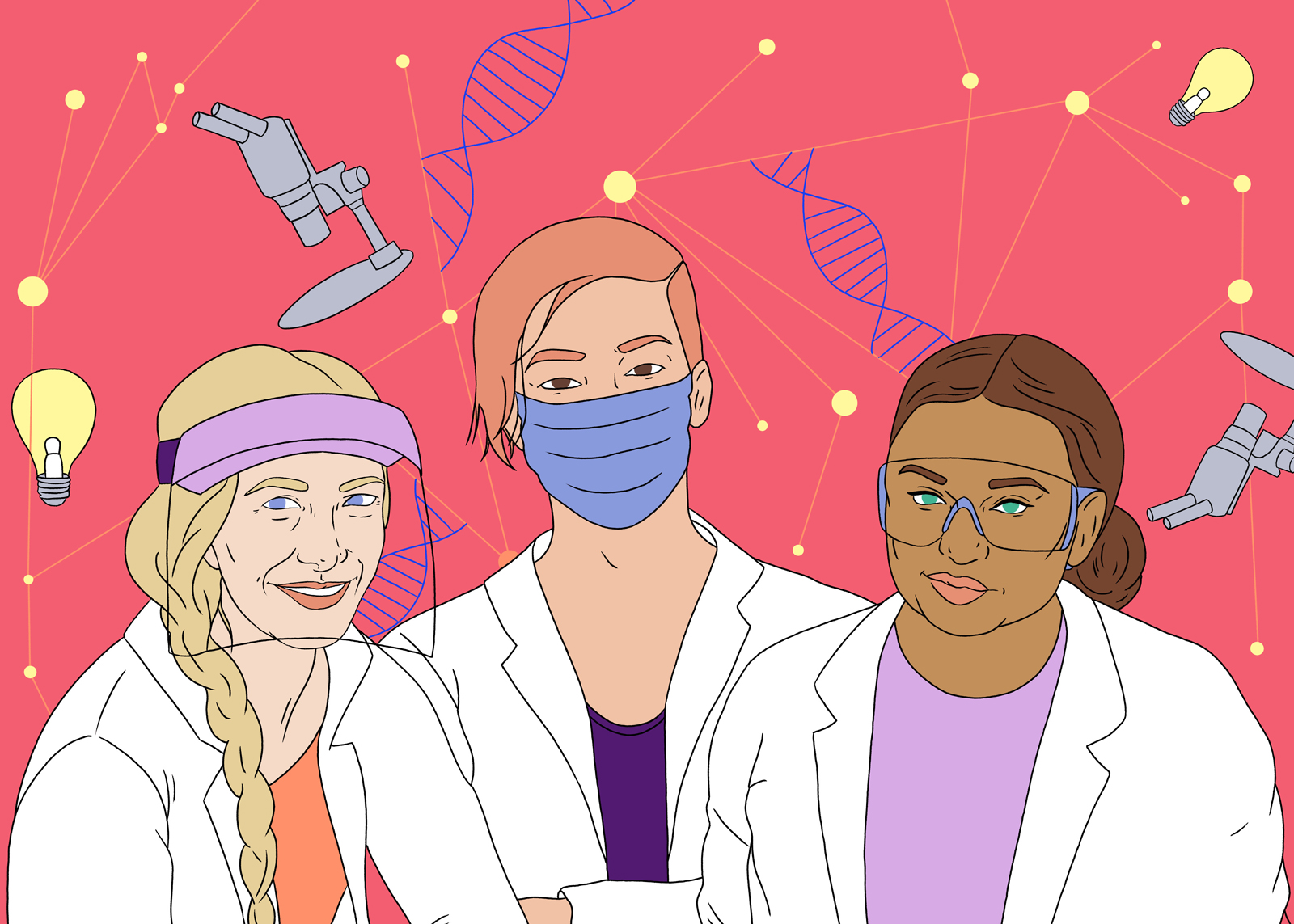 The Edge of All We Know: How Far Can We Go?

Exploring: Cutting-Edge Work at the Frontiers, the Edge of our Knowledge, Medical Innovation 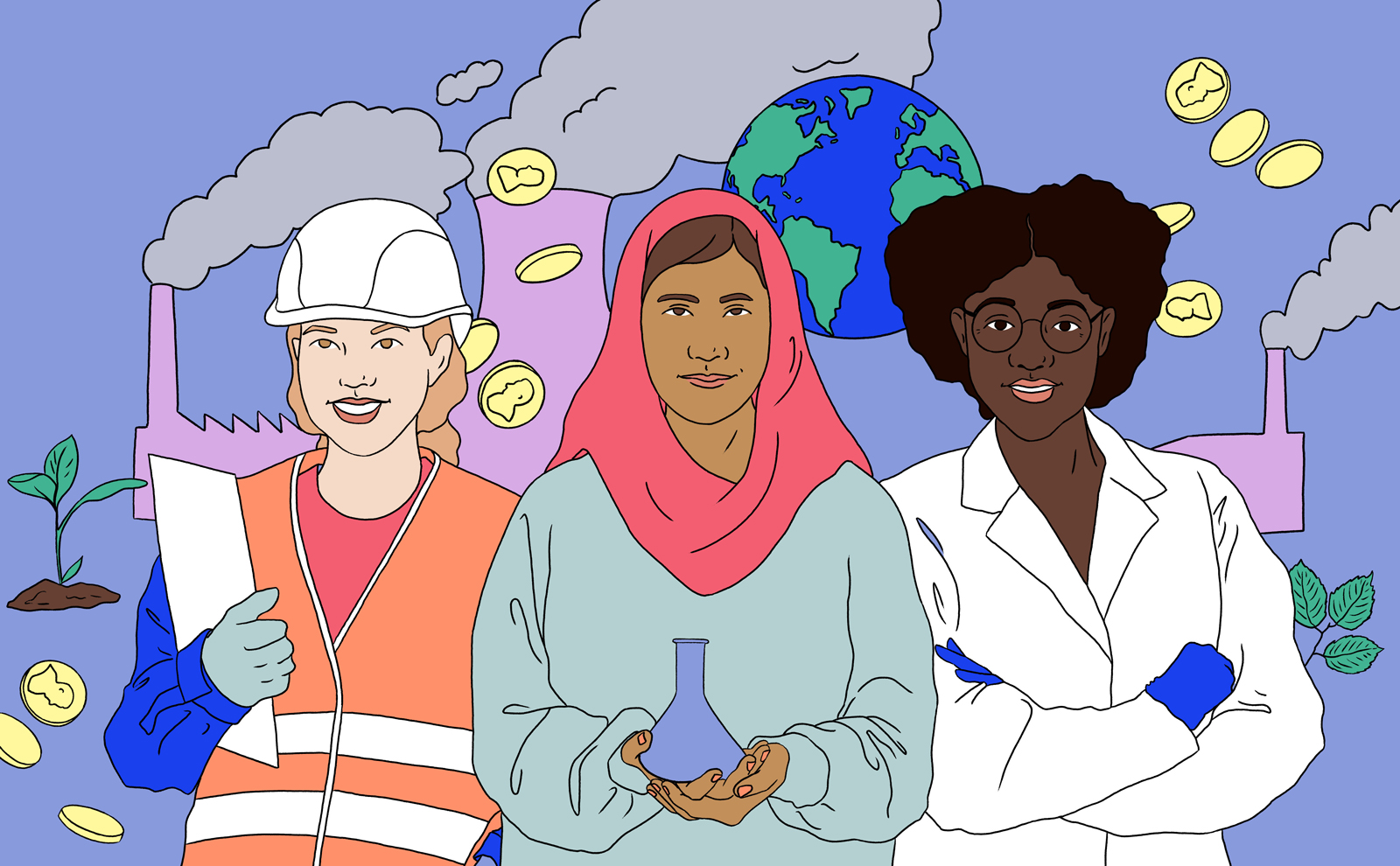 Diversity, Equity, and Inclusion in Science: How Do We Change the Faces of STEM?

Helene D. Gayle ’76
National Academy of Medicine
Medical doctor and CEO of The Chicago Community Trust, one of the nation's leading community foundations; for almost a decade, Dr. Gayle was president and CEO of CARE, a leading international humanitarian organization.

Karen I. Goldberg ’83, P’22
National Academy of Sciences
Chemist, currently the Vagelos Professor in Energy Research at the University of Pennsylvania; most known for her work in organometallic chemistry and catalysis; Barnard trustee.

Rochelle Reibman Hirschhorn ’53
National Academy of Medicine
Leader and role model in the advancement of women in medicine and genetics; Research Professor and Professor Emerita of Medicine, Cell Biology, and Pediatrics at NYU Langone Medical Center.

Dusa McDuff, faculty member
National Academy of Sciences
Mathematician who works on symplectic geometry; first recipient of the Ruth Lyttle Satter Prize in Mathematics and a Fellow of the Royal Society in the UK; the Helen Lyttle Kimmel ’42 Professor of Mathematics at Barnard, currently teaching "Introduction to Higher Mathematics" as well as courses in geometry and topology.

Elissa L. Newport ’69
National Academy of Sciences
Professor of neurology and director of the Center for Brain Plasticity and Recovery at Georgetown University; specializes in language acquisition and developmental psycholinguistics.

Susan C. Scrimshaw ’67
National Academy of Medicine
Medical anthropologist focused on gender, race, ethnicity, and culture and their impact on public health; following a faculty career at Columbia University and UCLA, served as president of Simmons College and The Sage Colleges.

*Every effort has been made to ensure the accuracy and completeness of this list. Kindly notify the Office of Development and Alumnae Relations of any errors or omissions.

Ruth T. Gross ’41 +
National Academy of Medicine
First woman to receive an endowed professorship at Stanford when she was named the Katharine Dexter and Stanley McCormick Memorial Professor of Pediatrics; pioneered general pediatrics at Stanford School of Medicine.

Eva J. Neer ’59 +
National Academy of Sciences
National Academy of Medicine
Revolutionized the study of cell biology; one of the first women to be named a full professor at Harvard Medical School and first tenured female professor in the Department of Medicine; recipient of the Basic Research Prize from the American Heart Association and the Excellence in Science Award from the Federation of American Societies for Experimental Biology.

Myriam Paula Sarachik ’54 +
National Academy of Sciences
Experimental physicist; joined the faculty of City College of the City University of New York as an Assistant Professor of Physics (1964); promoted to Professor (1970) and Distinguished Professor (1995).

+deceased
*Every effort has been made to ensure the accuracy and completeness of this list. Kindly notify the Office of Development and Alumnae Relations of any errors or omissions.

Stephanie J. Barron ’72
Senior curator and department head of modern art at the Los Angeles County Museum of Art (LACMA), where she has been responsible for more than 100 exhibitions

Jacqueline Kapelman Barton ’74
Pioneer in the study of DNA structure; recipient, MacArthur "genius" Fellowship; first woman to chair the Division of Chemistry and Chemical Engineering at the California Institute of Technology

Helen M. Berman ’64
Board of Governors Professor of Chemistry and Chemical Biology at Rutgers University; founder and director of the Nucleic Acid Database; former director of the RCSB Protein Data Bank

Nancy Farriss ’59
Historian; professor emerita at the University of Pennsylvania; specializes in the colonial history of Mexico; founded the Latin American Cultures Program at Penn in 1986

Ellen Futter ’71
President of the American Museum of Natural History; president of Barnard College 1981-1993; youngest person ever to assume the presidency of a major American college

Lynn Garafola ’68
Professor of dance at Barnard; dance historian, critic, and the author of Diaghilev's Ballets Russes and Legacies of Twentieth-Century Dance

Karen Goldberg ’83, P’22
American chemist, currently the Vagelos Professor of Energy Research at University of Pennsylvania; most known for her work in inorganic and organometallic chemistry; Barnard trustee

Susan R. Goldman ’70
Distinguished professor of psychology and education in the University of Illinois at Chicago’s College of Liberal Arts and Sciences; founding co-director of UIC’s Learning Sciences Research Institute

Rebecca Goldstein ’72
Author; former Barnard professor who taught courses in philosophy of science, philosophy of mind, philosophy of psychology, the rationalists, the empiricists, and the ancient Greeks; recipient of a MacArthur “genius” Fellowship and the National Humanities Medal

Ursula Goodenough ’64
Professor emerita of biology, Washington University in St. Louis, where she engaged in research on eukaryotic algae

Helene Kaplan ’53
Of counsel to the firm of Skadden, Arps, Slate, Meagher & Flom LLP; served in the not-for-profit sector as counsel or trustee of many scientific, arts, charitable, and educational institutions and foundations

Darcy B. Kelley ’80
American neurobiologist; Weintraub and HHMI Professor in the Department of Biological Sciences at Columbia University

Linda K. Kerber ’60
May Brodbeck Professor in Liberal Arts & Sciences at the University of Iowa; teaches courses in gender and legal history

Dorothy Y. Ko, faculty member
Professor of History at Barnard; cultural historian who specializes in the study of gender and body in early modern China

Helen Longino ’66
Clarence Irving Lewis Professor of Philosophy, Emerita at Stanford University; argued for the significance of values and social interactions to scientific inquiry; written about the role of women in science; central figure in feminist epistemology and social epistemology

Susan Lowey ’50
American biophysicist researching the structure and function of contractile proteins; professor, Department of Molecular Physiology & Biophysics at the University of Vermont

Elissa L. Newport ’69
Professor of neurology and director of the Center for Brain Plasticity and Recovery at Georgetown University; specializes in language acquisition and developmental psycholinguistics

Sigrid Nunez ’72
Author of eight novels, including A Feather on the Breath of God, The Last of Her Kind, Salvation City, The Friend (New York Times bestseller; 2018 National Book Award winner), and, most recently, What Are You Going Through

Marjorie G. Perloff, Ph.D. ’53
Sadie Dernham Patek Professor of Humanities, Emerita, Stanford University; teaches courses and writes on 20th- and 21st-century poetry and poetics, both Anglo-American and from a Comparatist perspective, as well as on intermedia and the visual arts

Barnard students and faculty collaborate with a range of research institutions, including but not limited to: